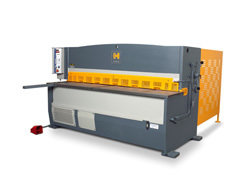 The HDS(X) with the new optional SC70 CNC control has a programmable rake angle setting and blade clearance setting.


The HDS(X) shear line comes with a standard motorized backgauge. Swing up or Swing away backgauges are offered as a standard on certain models.


All HDS model shears will have the new SP8 control as a standard. The SP8 CNC controls the backgauge and rake angle of the machine.

The control also features a programmable retraction of the backgauge and programming mode. Click on the pic to the left to see a larger size picture of the new SP8


The SC7 control was recently replaced by the new SC70 CNC control. The SC70 has a material library in its memory where the customer can program pre-determined rake angle and blade clearance settings.

The very modern looking SC70 has a pivot screen with amber colored LCD screen. The CNC also has a program memory for cutting several length workpieces out of one sheet.


The SC70 control can be programmed in both single cut or multiple cut mode. Features such as: retraction, automatic rake angle and blade clearance setting are standard on this control. Click on the picture to see a larger screenshot of the SC70.


The HDSX 10'x1/4" and 12' x 1/4" come standard with a high speed servo-driven backgauge. The precision ball screws are belt driven. The position accuracy of the backstop is 0.004"


The Atlantic shears are guillotine type shears. This means that the cutting action is a scissors cutting action. The hydraulic cylinders on the HDS(X) shears are positioned directly above the ram and push the ram in a downwards direction. Guillotine shears have several advantages above swingbeam type shears. They are made to cut several material types and thicknesses and have no twist in the frame like swingbeam types. The rake angle and blade clearance are adjustable on the HDS machines and programmable on the HDSX machines.


The oiltank on all Atlantic shears is large and oversized to prevent overheating of the oil and minimize oil change times. You will often find small oil tanks with oil coolers on other shears. The oil tank has a big cover to make cleaning of the tank easy during oil changes.


We adjust the rake angle on the HDSX shears by pumping more oil into or releasing oil out of the right cylinder. The automatic rake and blade clearance setting on the HDSX shears are controlled by the SC70. The SC70 controls 2 hydraulic cylinders which push the ram of the shear forward or backward. The ram is guided between 4 spring loaded bearings. The rake and clearance are set automatically by entering the material and thickness of the sheet to be cut.


The HDS(X) comes standard with halogen cutting lights to light the cutting area. The shadow line can be seen on the part to cut. The halogen lights can be reached easy to replace.


1 Year warranty on parts and labor.

All models are available with our SC70 CNC control.

Save this product for later